In 1948, Korczak Ziolkowski began construction of the Crazy Horse Memorial in the Black Hills mountain range of South Dakota. If completed it would stand as the largest sculpture in the world, 641 feet long and 541 feet high.

Yet after eight decades of supposedly continuous work all that has been carved of this Native American chief atop his eponymous horse is his face and a hole bored through the mountain around where his armpit would be. 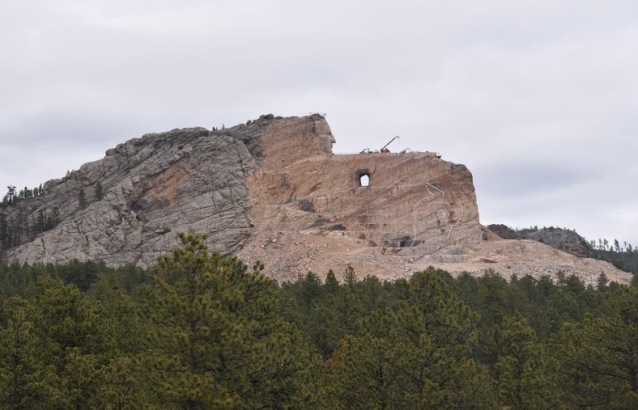 The Crazy Horse Memorial as of May 2017

The long delay and key role of Ziolkowski’s family in continuing the project has led to heated debate over who the Crazy Horse memorial is for, and whether there is even any desire to finish the sculpture.

The historic figure of Crazy Horse led victorious forces at the Battle of Little Bighorn and died in 1877 after being literally stabbed in the back by a federal soldier following his surrender. That this monument to a figure legendary among the Lakota Indian community is located fifteen miles northeast of Mount Rushmore positions Crazy Horse as a counterweight to a sculpture of pure American pomposity and manifest destiny.

A controversy surrounding both Rushmore and the Crazy Horse Memorial is their carving from mountainsides sacred to the Native American community. Russell Means, an activist of the same Lakota tribe as Crazy Horse, considers his memorial a desecration akin to carving up Mount Zion.

Today, numerous descendants of Crazy Horse remain opposed to the idea of a giant sculpture. One reason is the humility of Crazy Horse, who was never known to be photographed and requested his burial site be kept anonymous. Another is that the memorial was commissioned by Lakota Chief Henry Standing Bear, without consulting Crazy Horse family members.

Ziolkowski died in 1982, but plans to complete the gargantuan sculpture live on through his family. His wife Ruth worked for the Crazy Horse Memorial Foundation until her death in 2014, and to this day many of his children and grandchildren are involved with the project. Income from visitors to the site, which includes a museum and learning centre, amounts to around $15 million a year (Native Americans have free admission).

The Ziolkowski family continue to refuse government grants towards the construction of the monument. Korczak Ziolkowski took this stance after the Mount Rushmore project, which he briefly worked on, stumbled due to the fickle nature of federal intervention. Henry Standing Bear also had an understandable distrust of American government, since their reneging on the Treaty of Fort Laramie that had granted the entire Black Hills region in which Rushmore and Crazy Horse Memorial are located to Native Americans.

Yet with federal assistance, the presidential faces of Rushmore were completed in twelve years between 1927 and 1939. Federal grants to Crazy Horse would result in the Ziolkowski family losing autonomy over the site and its income, and an obligation to finally complete the project.

While this chiselled mountain-face is apparently a memorial to Crazy Horse, a tour of the museum will see as much if not more focus on Korczak Ziolkowski. The Pine Hills region is home to some of the most impoverished Native American communities in the United States, yet a New York Times article in 2012 noted that at the time the Crazy Horse Memorial Foundation hired more descendants of Ziolkowski than Native Americans.

Patrons of the Crazy Horse Memorial Foundation can point to outreach activities such as a summer programme for Native American students, and plans to accommodate onsite a branch of the University of South Dakota. While it may seem strange that a Polish-American family operate a site commemorating a Native American hero, they began with the blessing of a Lakota Chief and are making effort to connect with the Native American community.

Henry Standing Bear, who died in 1953, did not authorize the project with the intention of creating a family dynasty. Whatever the lofty goals of the Crazy Horse Memorial Foundation, questions remain over eight decades of Ziolkowskis taking revenue from a mountain sacred to Native Americans and a figure who expressed no desire to be memorialized in such an ostentatious fashion.